The Hunt for Wild Bananas in Sumatra

I’m back from the final MONDO BANANA shoots with Finnish banana taxonomist Markku Häkkinen in Malaysia and Indonesia. It was a fantastic nine days of exploration and discovery, and I got excellent footage for the documentary.

A week ago Sunday, I met up with Markku in Kuala Lumpur, the capital of Malaysia. We hadn’t seen each other for over a year, and to get re-acquainted we decided to take a trip to the KL Bird Park – the world’s largest free-flight aviary, which is located downtown and proudly displays photos from Martha Stewart’s recent visit. Now don’t get me wrong, this wasn’t just a Sunday trip to the ‘zoo’ for us – Markku had a specific purpose for choosing this location. Wild banana species are often grown as ornamental plants in Southeast Asian gardens and parks, and their seeds are spread by the urban birds, squirrels, and monkeys that munch on their fruit. So, while hordes of children gawked at the flamingos and families took advantage of photo ops with parrots, Markku and I were wandering off the trails examining the park’s banana plants. At times, this caused some confusion for the park’s other visitors who would follow after us assuming that we had spotted an unusual bird, only to find us with our noses in a banana flower!

While Markku’s past 14 expeditions to Asia have been focused on finding and describing new species of wild banana, for this, his 15th trip he had a different agenda. His current project is the huge undertaking of preparing a banana ‘monograph’ – a collection of color photos and descriptions of all the known wild banana species, which will be used by international researchers to identify the various wild banana plants that they might come across. Markku estimates that the book will be about 350 pages, with many of the images coming from his private collection of over 10,000 banana photographs…

One of the major gaps in Markku’s banana research has been the volcanic Indonesian island of Sumatra, a lush paradise home to some of the planet’s most fascinating biodiversity and a tubular hotspot for surfers. We knew that on Sumatra were two species of banana that Markku had not previously seen growing in the wild, and also some that are “unknown” (they have yet to be scientifically named). With camera gear in tow, Markku and I flew to the coastal city of Padang in West Sumatra, where we were met by a driver and a local banana researcher Fitriana Nasution from the Indonesian Tropical Fruit Research Institute.

Our first destination was a mountain waterfall where an unknown species of wild banana had been spotted, located 8 hours from Padang along a maze of two-lane roads that twisted through the island’s highlands and rural villages. Muslim calls to prayer and car horns echoed through the verdant valleys as we zoomed past small-town mosques and swerved around slow-moving trucks on blind curves. It’s a really good thing that nobody in the car was prone to motion-sickness!

Taking photos of wild bananas for the monograph

Bananas are known as a ‘pioneer species’, which means that they are one of the first plants to pop up when a forest area has been cleared away – naturally or by man. They grow up very quickly and provide the necessary shade and shelter for seedlings of other plant species, playing an integral role in the regeneration of forests. Because of this, wild bananas are quite commonly found growing along roadsides where the forest has been cleared. Thus, on the drive to the waterfall, our careening automobile often braked violently at the common shout of: “STOP THE CAR!!! There’s a wild banana!” We’d then dodge traffic, climb up eroded slopes, or slide into ravines to inspect and photograph an opportunistic banana that had sprouted. On a few of these impromptu pit-stops, Markku and Fitriana were surprised to discover that they were quite possibly gazing upon a new unknown banana species or subspecies…

The male bud and unripe fruit of a wild banana native to Sumatra, Indonesia

In Sumatra, the local name for almost all wild banana plants is simply “monkey banana”, because monkeys are one of the few creatures with teeth and digestive tracts strong enough to handle the large, rock-hard seeds found in the wild fruits. They then disperse those seeds as they scramble throughout the forest canopy and along roadsides, helping the banana seeds to find new homes elsewhere on the island.

One day, as we were tromping along a riverside trail looking out for the gorgeous purple flowers and fruit of a native banana plant, Fitriana informed me that the locals called this the “Pisang Jin”. In Indonesian, “pisang” means banana and “jin” means ghost. The name apparently came from the fact that this banana species is used in local black magic practices. I was curious, but Fitriana didn’t know any more. We moved on, and although the banana plants were plentiful both Markku and Fitriana expressed surprise that no male flowers could be found on any of the plants – they only saw the fruit and female flowers. We found the same at another location where the species was also growing: only female flowers and fruits, no male buds. Strange…. Then, we ran into a local man working in the woods. Knowing that I was eager to know more about the “Pisang Jin”, Fitriana asked the man about the origin of the name. Despite a belief in Islam, native beliefs and superstitions still run high in the rural areas of Indonesia, and soon the man revealed the mystery of the ‘ghost banana’ and the missing male flowers. 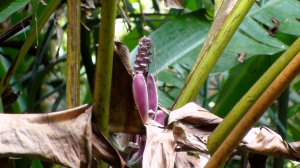 The purple fruits of the "Pisang Jin" peek out. The flower and fruit grow "erect" (they stick straight up). Note that the male bud has been cut off.

After six jam-packed days of hunting for wild bananas in Sumatra, I said goodbye to Markku as he headed off to the famous old-world botanic gardens in Bogor, Java to continue gathering photographs for his monograph. And, I went back to Kuala Lumpur for a day and half – where I was able to have a chat with Malaysian bat expert Dr. Christine Fletcher about the interlinked relationships that exist between fruit bats and Southeast Asian bananas.

And with that, the MONDO BANANA documentary is “in the can”!!!! An enormous THANK YOU to everyone who has helped to make this happen!! I honestly could not have done this alone and I’m absolutely honored to have your support.

Now, I’m gearing up to go to Guerneville, California where I’ll be spending the winter months holed up in a cottage alongside the Russian River editing MONDO BANANA. Stay tuned here and on Kickstarter for more updates and possibly some advance teaser clips from the documentary…