I arrived back in Bangkok at 4am this morning after a fantastic weekend of filming in Nakhon Sri Thammarat. Aside from being slightly “worked-over” from taking two 12-hour bus rides in a span of three days, I’m really excited by the footage from southern Thailand!

Mr. Tawee makes a last minute puppet of a banana-peel.

Upon arriving in Nakhon Sri Thammarat at daybreak on Saturday, I went to the home of Mr. Tawee Kongburee. Southern Thailand is famous for it’s traditional folk-art of shadow-puppet plays, and Mr. Tawee’s family has been in the business of shadow-puppetry for the past 500 years!!! For the MONDO BANANA documentary, Tawee specially made a series of shadow-puppets that represent the characters and settings of a banana-folktale about two greedy monkeys who find themselves in a “prickly” situation when they refuse to share bananas with a turtle. A shadow-play was then staged for the cameras by Mr. Tawee’s grandson, Joey, to bring this banana-story to life for the documentary. 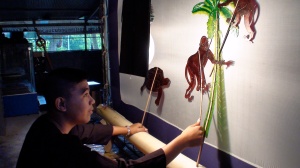 Joey acts out the banana folktale with shadow-puppets made by his grandfather. (note the banana-trunk)

Usually, shadow-plays are performed by only one puppeteer – even when there are 30 or more puppets to coordinate. Thus, before every show, a banana-tree must be cut down so that its soft trunk can be used for holding certain shadow-puppets stationary while the puppeteer operates the “active” characters.

Half-way through the shoots with the shadow-puppets, we realized that a critical puppet was missing: the banana-peel. But, within 10 minutes, Mr. Tawee had carved the puppet, his son-in-law had painted and mounted it, and the filming could continue!! 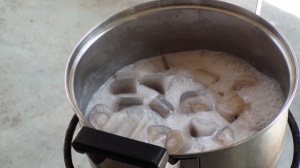 We did a number of re-shoots with the shadow-play and by the end we’d worked up quite an appetite. Luckily, Mr. Tawee’s daughter was preparing a local delicacy – mild banana-trunk curry in coconut milk. After she demonstrated the cooking process and shared her recipe, which calls for the banana-stem as the primary vegetable, everyone sat down to enjoy this and many other delicious home-cooked dishes.

A grove of wild banana trees growing by river. Their fruit is inedible, but their trunks are cooked as a vegetable.

As we ate, it was brought to my attention that only the stem of a wild banana species (that produces inedible fruit) from the local forests are tender enough to be used in the curry… So, the next day, another of Tawee’s grandchildren rode me into the forest on his motorbike to find the wild banana species…